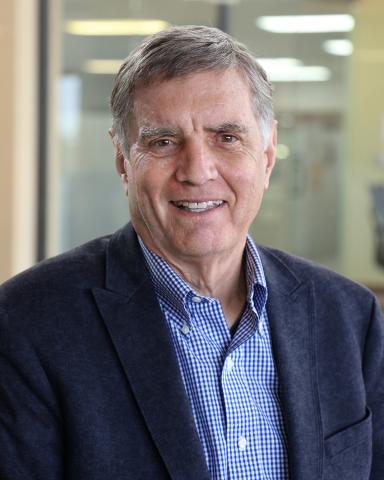 Fred Keller is the Founder and Chair of Cascade Engineering, which he started in Grand Rapids, Michigan in 1973. With a belief that you can have a successful business and still treat employees with dignity and respect, Fred began molding plastic parts with six employees in a 10,000 square foot building. Today, Cascade Engineering employs 1600 people across 15 facilities in six US locations and additional European operations in Budapest, Hungary.

Cascade Engineering has several business units spanning a wide diversity of markets including transportation, recycling/waste management, office furniture, agricultural/industrial containers, polymer compounding, and RFID asset management. Primarily focused on designing, engineering and injection molding of large plastic parts, Cascade Engineering is widely recognized for its business achievements and community involvement and is one of the largest Certified B Corps in the world.

Fred believes that business has the unique opportunity to complement its efforts on financial performance with important work in the social and environmental arenas. He has emphasized the key role business can play in building financial, social and ecological capital, often through partnerships with government and community agencies. Business and industry publications regularly feature his innovative management approach and work in advancing sustainability.

Fred recently completed 17 years as a Senior Visiting Lecturer at the Samuel Curtis Johnson Graduate School of Management at Cornell University. He served as an Executive-in-Residence at the University of Michigan – Ross School of Business. He was a member of the U.S. Department of Commerce Manufacturing Council with two years as chair under Presidents Bush and Obama. Keller also served on the W.K. Kellogg Foundation Board for 14 years with two years as chair. Fred is a trustee for the Gerald R. Ford Presidential Foundation.

Fred serves on the boards of Paragon Die & Engineering of Grand Rapids, Michigan, and Balcones Resources of Austin, Texas.  He has previously served on the boards of the Meijer Corporation and Fifth Third Bank, West Michigan.  He is currently an advisor to several startup companies around the country. He has been active with many community organizations and change initiatives. He is co-founder and chair of Talent 2025, a catalyst for the development of an integrated talent system to meet employer needs throughout 13 West Michigan counties. He served as co-chair of K-Connect, a Kent County Collective Impact Systems Change Collaborative.

A Grand Rapids, Michigan native, Fred earned his B.S. in materials science and engineering from Cornell University and an M.S. in business management from Rensselaer Polytechnic Institute.

Fred is an accomplished public speaker frequently asked to talk about the Triple Bottom Line culture he has instilled at Cascade Engineering, including their “Welfare to Career” and “Returning Citizens” programs. These programs have provided career opportunities for hundreds of employees formerly on welfare, or a second chance to those formerly incarcerated. His TEDx speech “Why Business, Why Now”, has been a common theme in many of his public speaking engagements. Fred believes that the power of collective business is the only force capable of solving the world’s toughest problems.