Lansing Should Focus on Solving Problems, Not Securing Wins 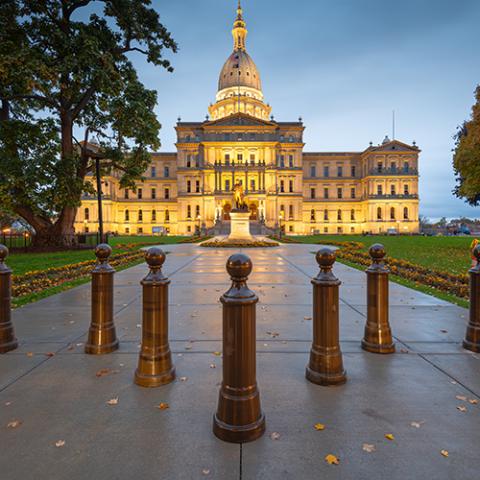 In today’s political world, many are a bit surprised at how little gets done. Others are exasperated at the divisiveness, the name-calling, even the lying of politicians. And others are content that their party is in power and will do the right thing.

What is interesting is that this landscape of politics hasn’t changed much from the founding days. I was reminded as I watched “Hamilton” that the bitterness, the rivalry, the name-calling was present even as that rogue band of innovators took on a new form of government.

It also occurred to me that perhaps rather than try to emulate the old days, it is time for us to do some innovating as well. It is time for government to embrace innovation.

We now have a political system that is quite predictable. As U.S. Senate Majority Leader Mitch McConnell so brazenly announced at the conclusion of the 2016 election, “Winners make policy, losers go home.” It is all about who is “in power,” meaning which party can control 50 percent plus one of the votes.

Power has been defined by who gets to make the choice among all the alternatives that are available. Power is about which party can “control” their party members and make sure they don’t “break rank.” And now that we have a power split with the U.S. House being controlled by Democrats and the Senate and White House by Republicans, do we expect things to go more smoothly?

The recent shutdown of federal government because of partisan disagreements doesn’t suggest we can expect any changes in how problems are solved any time soon!

Closer to home with the Michigan Legislature in the hands of Republicans and the governor’s administration controlled by Democrats, can we expect real problem solving to go on?

Michael Porter, the Harvard professor and marketing guru, wrote an insightful piece in 2017 titled “Why Competition in the Politics Industry is Failing America.” In it he points out that with just two parties we have a duopoly. And when a duopoly exists it is the desire of the participants to keep all others out; in a sense to keep the status quo. Each party’s primary interest is to be “in control.” So as long as there are only two parties, one or the other will hold the power.

The real objective of lawmakers should be to solve problems, and I believe many of them genuinely want to do so. Gov. Gretchen Whitmer based her campaign on “reaching across the aisle” and has confirmed that intent in her early days as governor.

And some Republicans have been known to favor bipartisanship. But new House Speaker Lee Chatfield has indicated he is willing to develop a relationship with Democrats in order to make progress.

However, the current reality (and the problem) is that the political process is about proposing solutions based on an ideology not based on true problem-solving. The process we often think of as problem-solving is “compromise.” Yet compromise generally feels to many like giving in: I give a little you give a little and we meet at the middle somewhere.

Compromise is good for negotiations when for instance there is a financial transaction, like buying a house. You start far apart and then “compromise” until the middle is reached.

What is stunning about complex problems is that they are not transactional problems, they have dozens of possible solutions and require a good process to find the optimum solution. Complex problems like how to pay for fixing Michigan’s crumbling roads or how to have an effective policy that keeps people out of prison again after they come back to their communities require deep understanding of the problems and barriers; an understanding of the options and it takes collaboration to find the best solution for Michigan, not the one that shows a particular party has won. Good problem-solving processes exist that can be used to arrive at good solutions.

What if we asked our politicians that instead of representing our particular special interest they would try a new innovation: solving problems using a good process. Wouldn’t that be better than asking them to be the most powerful?

After all, the power is in the process. If it is followed, the result will meet everyone’s needs.